Take That, You Locavores!

That was the sign in my local butcher shop in Cortona when I passed by a couple of days ago. The hand lettering advertises “Vitella Chianina”—vitella being something like what we would call baby beef, i.e., not a full-grown steer but still something much more imposing than a veal calf:

“From the mountains,” it says, “you can’t get more local than that!”

Chianina is the acclaimed local beef (native to our Val di Chiana, hence it’s name) from animals that were once the favored beasts of burden on Tuscan farms, big, calm, patient, you could almost say studious, white creatures with long horns, impressive musculature and a pedigree, locals say, that goes back to the Etruscans who once peopled this terrain. It’s a favorite for bistecca fiorentina, or as it’s called around here just plain fiorentina, which I’m told by butchers is the equivalent of a Porterhouse. But it also makes a splendid hamburger, especially when dressed with a dribble of fine Tuscan olive oil and a sprinkle of Sicilian sea salt–I’ll take it over ketchup any day.

Other local treats on the market at this time of the year include puntarelle which, if you know at all, you will know as a Roman delicacy, the leaves of catalogna chicory stripped down to the white ribs which curl into a salad that’s tantalizingly difficult to eat—there’s always a curl or two protruding from the corner of even the most delicately pursed lips. There’s not much point to that, as far as I’m concerned.  I like to serve the whole thing —why toss out perfectly good salad greens—but with the same deliciously garlicky anchovy dressing that Roman cooks use on the stripped ribs. 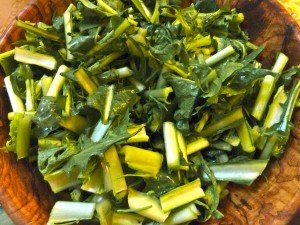 But I’ve run out of space and time. And I do want to mention the dressing for puntarelle because it’s dead easy: Just make your usual salad dressing, one part wine vinegar or lemon juice to three parts fine extra-virgin olive oil, but add to it 4 or 5 cloves of fresh garlic and half a dozen oil-packed anchovy fillets, both chopped fine. You can put the whole thing in a food processor and whiz it briefly to combine but don’t overdo it–you want a slightly grainy texture to the dressing. And of course you should feel free to adjust, adding more garlic or fewer anchovy fillets as your palate tells you. A healthy sprinkling of ground black pepper doesn’t detract either. 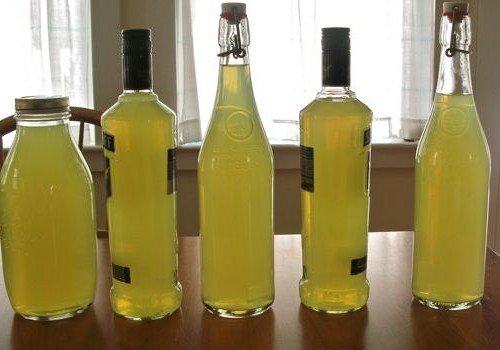