Report From the Front: AmorOlio, October 2013

AmorOlio, the six-day olive oil seminar that I’ve been developing and growing over the last couple of years, just concluded its last session for 2013 and it was a resounding success. Like the other six that we’ve done, this one was held at Villa Campestri, a lovely resort high in the hills above Vicchio in the Mugello, north of Florence.

Villa Campestri calls itself an “olive oil resort” with good reason, surrounded as it is by its own extensive groves of olives from which the Pasquali family produce one of the finest olive oils around. So it’s a good place to think and talk and taste—all about olive oil, one of my favorite subjects.

Through a series of guided tastings with Gemma Pasquali, one of the resort’s owners and a highly qualified olive oil expert, we sampled a good 15 different oils over the course of our stay, learning right from the start how to taste and how to distinguish good oil from bad—and then the various guises that both good and bad can take. Not everyone gets the difference immediately between the flavor of fresh artichokes and that of green bananas, but I was thrilled to hear all the excited comments along the lines of, “First thing I do when I get home—gonna throw out all that old olive oil in the kitchen cupboard.”

Harvesting olives and extracting the oil right in front of you, smelling that heady aroma of just crushed olives, gives real insights into why it’s not so easy to make great oil and why there’s so very much bad oil on the market—and not just in the U.S. either. And then, of course, tasting the fresh neon-green oil just as it comes from the press is an unbeatable experience, really the high point of the trip.

But AmorOlio isn’t just about choosing olive oil, knowing good from bad. It’s also about using it—in the kitchen and at the table. And that’s where Campestri’s wonderfully engaging teaching chef, Christian Borchi, came in. Christian joined us from his Vicchio restaurant, Antica Porta del Levante to coach us through a series of classes based on Tuscan traditions  like fabulous tortelli di patate, big fat ravioli filled with a potato stuffing, that are a classic up here in the Mugello, and a sformato di zucca, a sort of squash pudding that could be perfect for Thanksgiving if you can get one of these dark-orange Tuscan winter squashes. 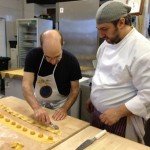 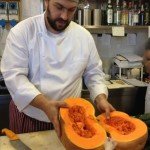 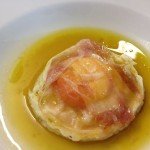 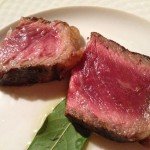 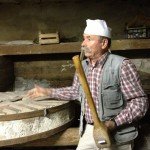 And of course there’s also the whole Tuscan wine and culinary environment to explore—which we did with huge enthusiasm, visiting the vinsantaia at Selvapiana where Federico Giuntini make a fabulous example of this Tuscan dessert wine; or stopping at Massimiliano Mungilli, a wonderful sheep cheese dairy for a lesson in how to make real ricotta, which is so sweet and fragrant compared to the curdled milk that so often passes for ricotta back in the U.S.; or—a rare treat—visiting the old water-powered grist mill on the confluence of three rivers up above Vicchio where Roberto the miller grinds locally grown wheat and corn into flours with magnificent flavor. (He also dresses the grist stones himself, which is what he’s explaining here.)

And there was plenty of restaurant dining too—those famous tortelli di patate at Osteria di Nandone in the improbably named hamlet of Omo Morto (Dead Man) on a mountain road outside Scarperia, and then on another mountain road, also a major link up over the mountains from Florence into Emilia Romagna, there was Trattoria Bibo, where Alessandro Cianti hand selects the meat, oversees the aging, and produces with skill and dedication some of the finest steaks to be found anywhere in the world, all cooked by  him on the embers of his wood fire and served—not with Tuscan olive oil but surprisingly with a very fine oil from Pianogrillo in Sicily. Alessandro and his wife Federica avidly seek out the best and if it comes from Sicily, so be it.

Finally, we had a morning’s visit with guest chef Marco Stabile, whose Florence restaurant L’Ora d’Aria has boasted a Michelin star for the last three years. Like Christian, Marco has his roots deep in the traditions of the Tuscan kitchen, but at the same time he brings to the table both a sense of humor and a stylish intelligence. Witness the dish he started off with—bacon and eggs, he said, because that’s what we Americans like to have for breakfast. But what an egg—perfect, fresh and flavorful, with a deep orange yolk. And what bacon—tarese it’s called, a type of meaty pancetta to be found only in a very narrow sliver of the Val d’Arno south of Florence. And what a dressing—an emulsion of barrel-aged apple cider vinegar with Villa Campestri’s own just-pressed oil and a sprinkle of Maldon salt. Simplicity, and perfection.

In the end, the only complaint we heard from our AmorOlio guests? Too much good stuff to eat! But you’re in Tuscany such a short time, and the season of new oil doesn’t last very long, so it’s best to get in as much as you can before you head back to wherever you call home. 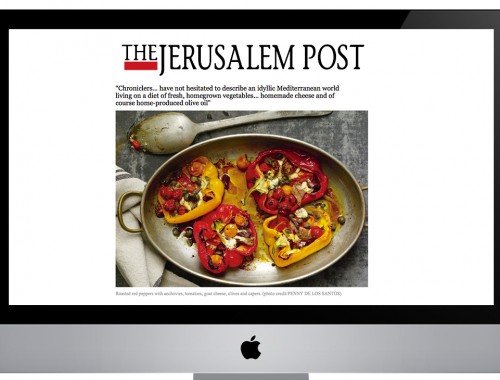