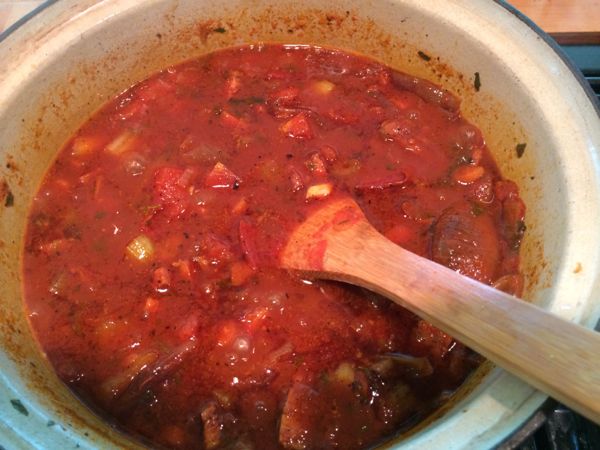 Recipe of the Week: Ragu for Pasta Bright red when it starts to cook, the ragu gradually deepens to a rich mahogany brown.

I roasted a boneless pork loin for company supper, following a recipe in The New Mediterranean Diet Cookbook that I used to make when I lived on the island of Cyprus many years ago. The pork was marinated in a mixture of red wine, crushed coriander seeds, and sherds of cinnamon, then roasted or rather oven-braised in its marinade, with some small white onions added to the pot. The cooking was long and slow and the resulting pork was delicious, but we only consumed half of it. What to do with the rest?

Cold pork sandwiches make a terrific lunch or Sunday supper, especially if there are good pickles to go along with them. But there was still more pork to be dispensed with and reheated pork roast is not great—the meat just dries out to throat-sticking texture. But why not turn it into a ragù for a pasta sauce?

Here’s what we say about ragù in The Four Seasons of Pasta, the cookbook I’ve written with my daughter that will come out in October of this year:

At its most basic ragù is meat (pork, beef, veal, rabbit, wild game, duck), ground or chopped or, especially in the South of Italy, a whole piece rolled and tied, cooked very slowly with some kind of liquid (tomatoes most often, occasionally wine, sometimes stock, sometimes just plain water) and some kind of vegetables (onions, garlic, carrots, parsley, celery, herbs) until the meat is so tender that it falls apart and the chopped vegetables dissolve into the liquid. At that stage the ragù is thick and unctuous, suitable to coat pasta, in whatever shape.

So that’s what I did with the leftover pork. First I sliced and chopped the meat and set it aside. Then I took out a good-sized yellow onion, a couple of cloves of garlic, a couple of carrots, and a couple of celery stalks. I chopped all the vegetables and sautéed them in a a few tablespoons of olive oil (extra-virgin, it goes without saying), then added in the chopped pork and turned it all in the oil to make a rich and well-balanced composition. I added the remains of a bottle of good red wine and let it cook down while I chopped a few leftover tomatoes, so ripe they were almost ready for the compost. The tomatoes went into the ragù along with a cup of plain tomato sauce (just pureed tomatoes, nothing else). Next came salt, pepper, a couple of bay leaves, and the juices left over in the meat platter, along with a handful of chopped flat-leaf parsley and a branch of lovage from the herb garden. The heat got turned way down, a flame-tamer went under the pot, and the ragù just barely simmered for 3 hours, until the pork bits were so soft and tender you could cut them with a fork. Every now and then I lifted the lid and added a little bit of boiling water, just to keep the whole thing bubbling away. It grew darker as it cooked until it was almost a mahogany color, and rich with deep flavor. Served over farfalle, butterfly or bow-tie shaped pasta, with a sprinkle of freshly grated parmigiano reggiano, was it, as they like to say, to die for? I’m not sure but it was a mighty fine ragù 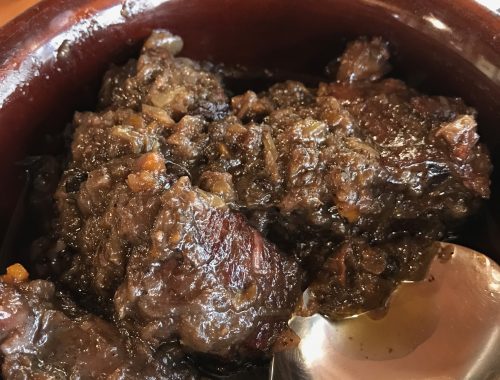 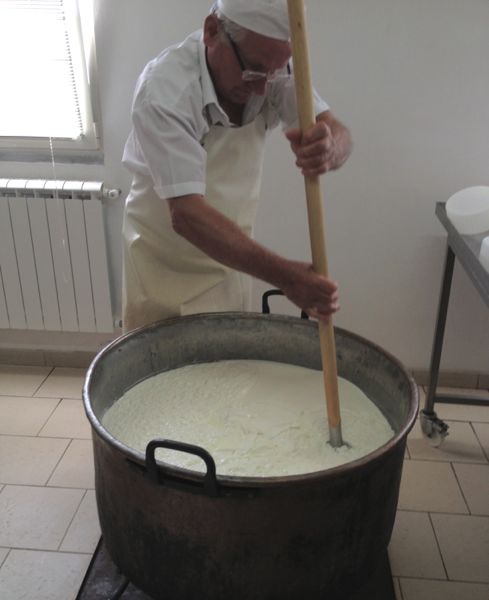