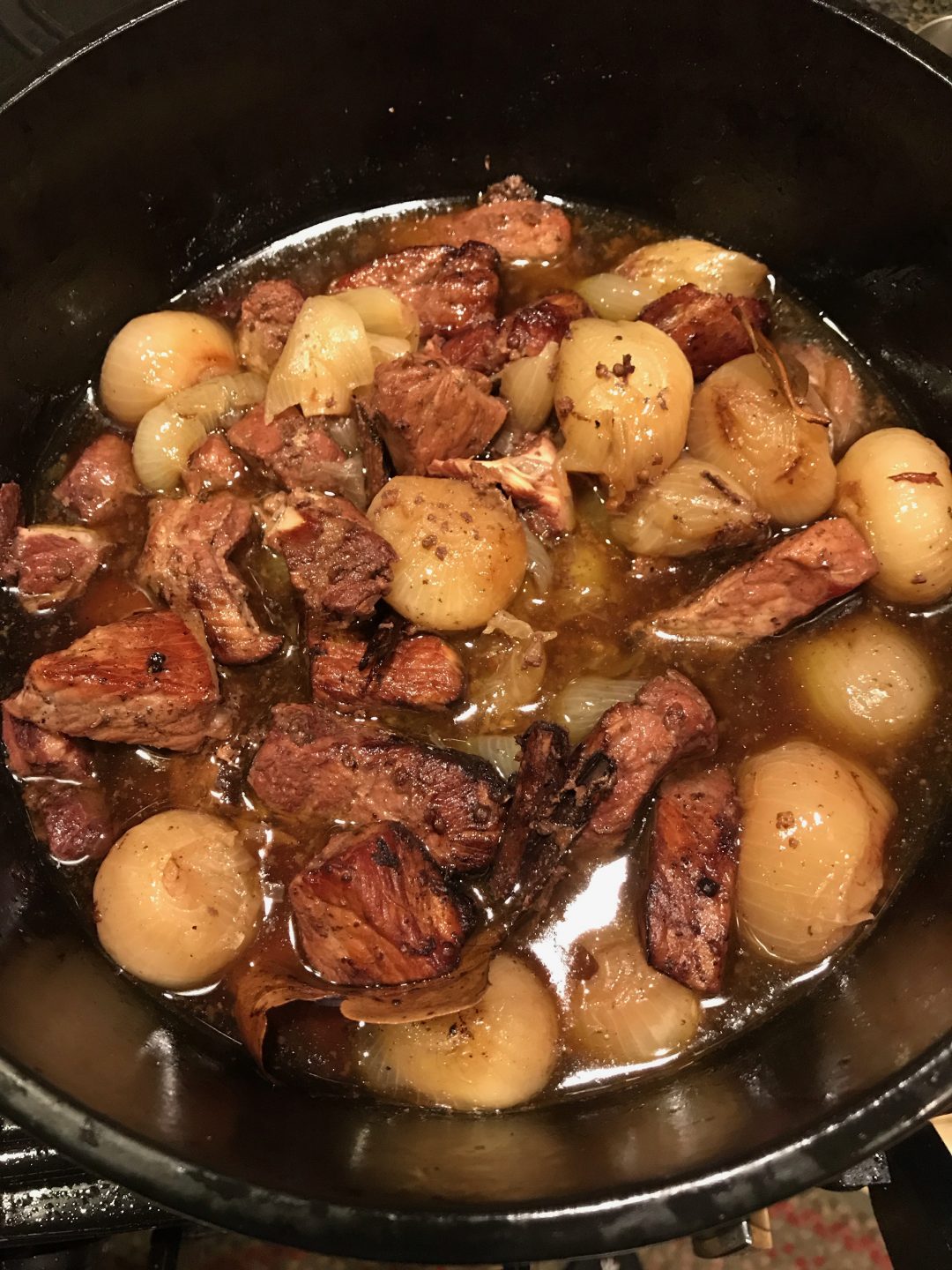 Pork for the Year of the Pig Tomorrow, Tuesday February 5, is the beginning of Chinese New Year. This is the Year of the Pig, and according to a UK website called fenshuiweb.co.uk, good news is on the horizon with world events, a more calming influence in Middle Eastern countries, and huge leaps forward in relationships worldwide. Does this mean an Israeli-Palestinian peace deal at last? Just remember, you heard it here first.

To celebrate the Year of the Pig, the middle of winter, Groundhog Day, and a few other timely festivities, a slow-cooked pork stew is in order, the sort of thing that gets started in the morning, or even the day before, with a marinade of meat in aromatic wine. The meat gets browned in oil and then the marinade is added back and the stew bubbles slowly on the back of the stove for hours, tenderizing the tough meat and pulling all the flavors together in a rich, dense sauce.

Today’s choice is afelia from the island of Cyprus. Afelia is sometimes made with octopus, but pork is much easier to come by and, as a fatty meat with plenty of flavor, it works well  in this long-cooked stew. Other Greek cooks might call this stifado and they will tell you the name means “cooked with onions.” It doesn’t actually (it really means stew), although that’s a pretty good description of Cypriote afelia, which always includes masses of small, whole onions, cooked down almost to a pulp to enrich the sauce with sweetness. In Italian, the same kind of dish is called stufato and since the stove is the stufa, you can easily see where the idea comes from.

Stifado or stufato, afelia or just plain stew, these dishes are traditionally made in earthenware vessels, casseroles if you wish, with lids that can be sealed hermetically with a flour-and-water paste between the rim of the dish and its lid. I’ve broken so many traditional earthenware dishes over the years and they have become so difficult to replace, that I’ve long since switched to the more robust Emile Henry, similar clay pots but a good deal sturdier than the traditional ones. (Their website, by the way, offers a remarkable collection of deeply discounted items. Take a look: https://tinyurl.com/y9lw933k.) So that’s what I use for afelia, with apologies to the cook in Bellapais on the north coast of Cyprus who showed me how to do this in her blackened terracotta kapama with its cracked and patched lid. The addition of crushed coriander seeds and cinnamon is typical of Cypriote seasoning.

A version of the recipe is in my New Mediterranean Diet Cookbook (https://tinyurl.com/y94lpyod). I like to use pork shoulder for this, the cut that’s called Boston butt in some regions and picnic shoulder in others. You could just as well sub in beef, veal or lamb (but then you wouldn’t be celebrating the Year of the Pig, would you?). The point is to use a cut of meat that has plenty of fat and connective tissue, so the meat pieces melt into the sauce, not completely dissolved but soft enough to cut with the edge of a fork. After an overnight marinade, the initial preparation takes about 30 minutes, then the afelia stews quietly for several hours. It’s also one of those dishes that is even better the second day so don’t be afraid to make it a day ahead.

Local Cypriote red wines tend to be big and richly fruity so a good wine to use here would be a California cabernet sauvignon with well-developed fruit flavors.

If you don’t have a mortar and pestle, crush the coriander seeds by putting them in a paper bag and rolling a heavy rolling pin back and forth over them. Do not use ground coriander. And for a nice variation, add several strips of orange zest to the stew with the bayleaves.

Makes 4 to 6 servings, depending on what else goes with it.

Put the pork pieces in a bowl and add the wine. Crush the coriander seeds in a mortar to break them up (do not use already ground coriander). Add them to the bowl along with the cinnamon and turn the meat to make sure all the pieces are well covered with the marinade. Cover and set aside in a cool place or refrigerate, for several hours or overnight.

When you’re ready to cook, set the oven on 250ºF. Remove the pork pieces from the marinade and dry with paper towels. Set a large lidded casserole dish or heavy saucepan over medium heat. Add ¼ cup of the oil and when it is hot, brown the dried pieces of pork thoroughly on all sides. As they brown, set them aside on a plate.

When all the pork is done, add the onions to the dish and continue cooking, turning the onions frequently to brown them on all sides. Remove as they brown and set aside.

When all the meat and onions are done, tip out the oil from the dish. Return the dish to medium heat and add 2 to 3 tablespoons of fresh oil, along with about a cup of the wine marinade. Bring to a simmer, scraping the bottom of the dish with a wooden spoon to get up all the brown bits. Now add back the meat and the onions and then all the remaining marinade. Tuck the bay leaves in, along with orange zest if you’re using it. Add salt and black pepper. Cover the dish, lower the heat, and bring the liquid slowly to a simmer. When it’s simmering slowly and steadily, transfer to the preheated oven. If you wish, you can make a thick paste from flour and water and use it to seal the lid before you put it in the oven. Leave the dish in the oven, undisturbed, for at least two and as much as three hours, or until the meat is very tender and the onions are starting to fall apart.

Remove the dish from the oven and check the consistecy of the juices which should be thick and almost sticky in texture If the juices seem too thin, remove the meat and onions from the stew and boil the liquid down on the top of the stove until it reaches the right consistency, then return the meat and onions to the pot. Serve the stew with steamed potatoes or plain rice to sop up the remaining juices. 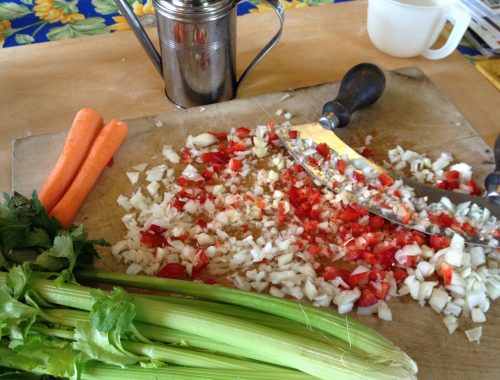 How Do You Say Delicious in Italian?