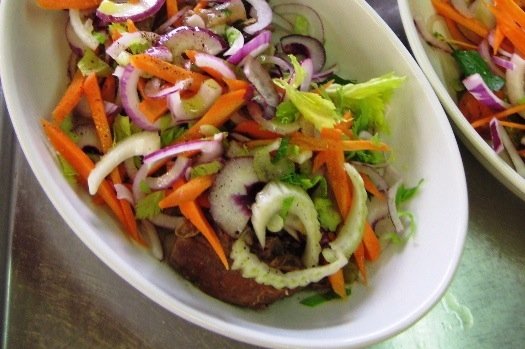 On a spring Sunday when the Tuscan weather typically can’t decide between sunshine or rain and gives us a bit of both, Panzano, in Chianti, is lively, bustling with locals as well as tourists who come down the Strada Chiantigiana, the old road from Florence to Siena that bisects the town. It’s market day in Panzano and the produce vendors are out in force, the bakery, with its wood-fired oven, is open and flourishing, and so is the Antica Macelleria Cecchini, possibly the most famous butcher shop in Italy, if not in the entire world. This is where Dario Cecchini holds forth, occasionally spouting Dante as is his wont, or blowing a bugle fanfare when someone he knows and especially likes arrives for lunch or to purchase one of his renowned chianina beefsteaks. (The steaks are not the meat of the legendary Tuscan breed but beef that Cecchini imports from a farm he has selected in far-off Spain.)

Cecchini has been celebrated by any number of worshipful food writers, including me, but none more so than Bill Buford in his bestseller “Heat,” which recounted, among other tales, his difficulties as he “studied” the ancient Tuscan art of cutting meat under Professor Cecchini. Rumor in Panzano has it that a film is to be made from the book, but who will play Cecchini? The word on the street is Jack Nicholson, which, IMHO, would be a serious mistake. My two choices have long since gone to that great cinema in the sky, but Peter Sellers or Marcello Mastroianni would have done far more for the incredible enthusiasm, the sheer allegria, of the magnetic Tuscan butcher than could sullen, surly old Jack.

In the 20 or so years since I first met him, Cecchini has become a force to be reckoned with, quoted in almost any story about food in Tuscany and sought out by hordes of gastronomic tourists who crowd into his still tiny shop on Sunday mornings for a glass of Dario’s wine and a taste of something delicious, such as a little crostino, a crust of bread, liberally spread with hisburro chiantigiana, creamy fresh pork fat (not lardo, which is something else), mixed with rosemary and black pepper, that is far more delicious and better for you than it sounds.

Recently, Macelleria Cecchini has expanded into a restaurant, actually several, occupying separate spaces around, behind and across the street from the butcher shop. Solociccia (SO-lo CHEE-cha), open Thursday through Sunday (see inset) offers six separate meat courses plus a starter pinzimonio of raw vegetables and Tuscan olive oil in which to dip them, a robust dish of traditional chickpeas and canellini stewed together, a very simple dessert, wine, water and coffee — all for 30 euros, or about $37.50. At Mac Dario, out behind the butcher shop, you can have one of the finest burgers you’ll ever eat, along with roast potatoes, vegetables and a selection of sauces, for just 10 euros — right now that’s about $12.50. (Mac Dario also offers a somewhat more expansive menu for twice that.) Then there’s the Officina della Bistecca, where 50 euros ($65) buys a menu that’s based on fine beef, including several different versions of steak — porterhouse, rib eye, and something called panzanese bistecca, as well as an elegant steak tartare.

The tasting menu in Solociccia allows diners to sample a number of traditional Tuscan dishes that aren’t easily found elsewhere — fritto del macellaio, for instance, a selection of meats and vegetables battered and crisply fried, or a chopped beef meatball, skewered with fragrant rosemary, crusty brown on the outside, moist and almost raw in the middle, or that gratifying mix of legumes generously anointed with Dario’s own olive oil. It’s in a place like this (and, alas, there are not many left) that gastrotourists begin to comprehend that in Italy there is no such thing as Italian cuisine, and in Tuscany no such thing as Tuscan; indeed, every town and village, every household, has its own way of doing things and that way, of course, is the only true genuino way, all others being some kind of fusion-cuisine mistake.

Dario is rigorous in his support of local traditions and, despite his flamboyant approach to publicity — or perhaps because of it — he has effected what amounts to a movement, unorganized though it is, that acknowledges the value of these traditions, a Slow Food movement in miniature, you might call it. After all, he grew up here, his father was the butcher and so were his grandfather and his great-grandfather before him, all operating out of this same tiny space. In his skill at manipulating the publicity machine, Dario has shown himself to be a canny Tuscan and a thoroughly modern man, not a nostalgic throwback to some village butcher who twirls his moustaches before slicing your Sunday joint or bistecca. I once wrote this about him: “Dario sees himself, it seems, as the end point of a funnel that stretches back over the centuries, a funnel through which the venerable traditions of the past flow into the future.” That is still true to this day.

For a recent Sunday lunch, Dario’s restaurant cook, the delightful Simonetta Casciarri, had made a dish called Tenerumi in Insalata, a gorgeous salad of raw, marinated vegetables and warm slivers of tender beef. When I asked what the meat was, Dario stuck out his own knee: It’s the cartilaginous muscle around the animal’s knee bone, with the attendant tendons. This is not a cut familiar to most Americans but in Tuscany, or at least in Chianti, Dario explained, the whole of the animal is used — just as they say of the pig, “everything but the oink, so with beef cattle, it’s everything but the moo.” As in Chinese cuisine, beef tendons are particularly prized for their rich succulence.

This is a very old dish, one I have never encountered in the Valdichiana, my part of Tuscany. Surely it goes back to a time before the 1950s when chianina were working animals that plowed Tuscan fields, threshed Tuscan grain and carried Tuscan goods to market. Animals like that led long, dignified, respectable lives and when that life was over, their flesh had become, not to put too fine a point on it, tough. Long, slow simmering made the cartilaginous parts especially tender and tasty. An added benefit to the process is, of course, a rich and flavorful broth that can be used for all sorts of other purposes, from soup to risotto. But you don’t start out to make a broth, Simonetta told me, and for that reason you don’t begin by putting the beef in cold water. Bring the water to a boil, then plunge in the meat and it will seize up and stay more juicy. For the same reason, don’t salt the liquid, which will draw the meat juices out into the broth—the opposite of what you want.

You could use firm vegetables in the salad other than those listed below — radishes, for instance, or tender little Hakurei turnips. I would not suggest cucumbers or tomatoes as the juices will make the mix watery. Simonetta did not mention mustard for her dressing, but I had a jar of Dario’s senape, made from a recipe of the American grandmother of his fiancee Kimberly Wicks. Honey vinegar in the mustard gave a nice sharpness to the dressing. A good honey mustard would also go well in the recipe.

Tenerumi in Insalata (Marinated vegetable salad with slivers of tender beef)
Serves 6 with a main course, 8 to 10 as part of an antipasto plate

About 2½ pounds of meat on the bone, preferably sinewy pieces from around the knee joint
3 medium carrots, scraped
2 big branches of celery, the greener the better
1 large red onion, cut in chunks

1. Set the meat, carrots, celery and onion for the broth in a stock pot and just cover with water. Remove the meat and set aside. Bring the water to a boil, then add back the pieces of meat, let the water return to a boil, then turn down to the lowest possible simmer. Cover the pot, leaving the lid slightly ajar, and cook for a full 3½ hours. Midway through the cooking, turn the meat pieces over and check occasionally to make sure the water is not boiling away — but it shouldn’t be a problem at such a low heat. (If you must add water, make sure it is boiling before adding it.)

2. When the meat is done, remove from the stock and set aside. As soon as it is cool enough, refrigerate the meat. This will make it easier to slice later on.

3. Strain the stock, discarding the vegetables, and set in the refrigerator so the fat rises and makes it easier to remove. All this can be done well ahead. You’ll use a small amount of flavorful stock to reheat the meat but the rest should be kept for soup or risotto.

4. A few hours before you’re ready to serve, clean and slice the salad vegetables. Do this on a mandoline if you have one, or use the slicing blade on a food processor. The slices should be thin, but not paper-thin. Combine all the sliced vegetables with the red onion slivers in a large bowl.

5. In a smaller bowl, crush the garlic clove with the salt, using the back of a spoon to make a paste. Stir in the oil, mustard and wine vinegar, and taste. Adjust the seasoning before pouring the dressing over the vegetables in the bowl. Turn the vegetables to coat them and set aside to marinate slightly for at least an hour before serving.

6. When you’re ready to serve, slice the meat thinly. Include the cartilaginous bits and the tendons. Set the meat slices in a pan and add about a half cup of the degreased stock. Bring to a simmer and continue simmering until the meat is hot. Remove the meat using a slotted spoon and combine with the room-temperature vegetables on a broad platter.

7. Serve immediately before the meat cools off. 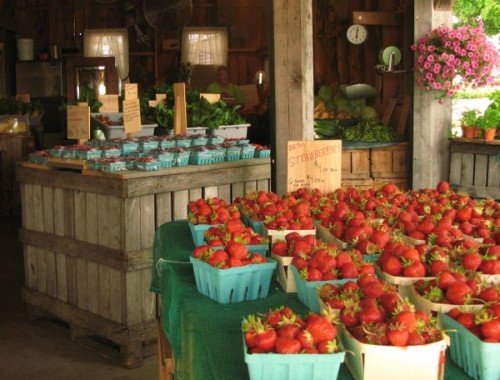 The incredible bliss of June in Maine 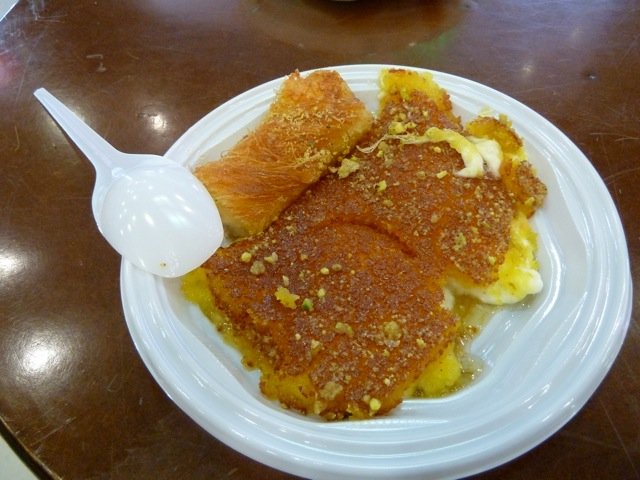