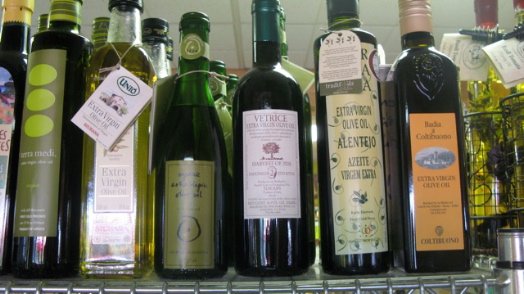 No surprises there, perhaps, since the Olive Center is in the forefront of energetic attempts to grow the California oil industry, which is currently responsible for just 1.5 percent of the $700 million U.S. market in extra-virgin olive oil. But eyebrows were raised when it was revealed the research was funded by the companies behind two of the California oils that were tested (Corto-Olive and California Olive Ranch) and by the California Olive Oil Council, an industry group. The oils were tasted, and tested, blind so there probably was no messing with samples; still, even the appearance of conflict of interest can color the public’s perception of results, especially when they so favor the home team over the visitors. Trade groups, including the North American Olive Oil Assn. and the Madrid-based International Olive Council, have lambasted the study’s methodolgy.

Here’s how it worked: The 14 imported oils were each represented by three samples, purchased from retail shops in Sacramento, the Bay Area and Los Angeles, making 42 samples to be tested. The research team also bought two samples each of five California oils (only two because the California oils, for some reason, were not available in Los Angeles). All the oils, imported and domestic, were labeled extra-virgin. Researchers then subjected each sample to a battery of tests, starting with an organoleptic, or sensory test developed by the International Olive Council (IOC) and adopted by the U.S. Department of Agriculture to determine the quality of an oil from its aroma and taste. (According to the IOC, extra-virgin oils must have “perfect” organoleptic characteristics, even though those characteristics can vary widely from one region to another and from one variety to another.)

The Davis team also sent its samples to Australia to be analyzed by the Australian Olive Assn.’s Oils Research Laboratory in New South Wales.

The conclusion in a blind sampling? More than two-thirds of the imported oils and a mere 10% of the Californians — one sample of one oil — failed the test.

The same samples were then put through a series of chemical tests, including analysis for free oleic acid and other indicators used by the IOC and USDA to determine the authenticity of extra-virgin olive oil. Finally, the researchers analyzed the oils according to more rigorous standards recently adopted by the German government and the Australian Olive Assn. Of the samples that had already failed the organoleptic assessment, 31% went on to fail the IOC/USDA chemical analyses. A full 83% also failed the more rigorous tests.

There are any number of reasons suggested for the defects:

So does this mean that all these imported olive oils are made by irresponsible producers, if not downright frauds and cheats? Paul Newman? Rachel Ray? Whole Foods? If you read the headlines, you’d have to conclude that such eminent names are indeed guilty of fraudulent behavior. “Study Confirms: Most Imported Extra-Virgin Olive Oil Sold in California Is the Pits,” said the L.A. Times. “Have you heard the bad news about imported extra-virgin olive oils?” asked an online vendor of Italian products. “Most Imported Olive Oils Don’t Match ‘Extra Virgin’ Claims, Study Finds,” warned YubaNet.com.

But take a closer look at the study. First of all, this is a small sampling: 14 out of several hundred different oils that are imported annually from all over the world. And it is a sampling only of what we might call industrially made oils (Carapelli, Colavita, Filippo Berio, Pompeian, and the like), that is, oils made in very large quantities, possibly coming from a number of different sources. These are not estate oils, as the producers would be the first to admit. The California oils, on the other hand, come from estates like McEvoy Ranch and Corto-Olive which have established reputations for careful production from their own olives It’s a little like comparing a Wisconsin factory cheddar with a well-aged raw-milk Montgomery cheddar from Somerset in England.

Still, if an oil is labeled extra-virgin, whether industrially produced or estate-grown and bottled, it should be extra-virgin, shouldn’t it? What the Davis study does show is that of the 14 imported oils, only a few uniformly failed the tests, no matter where they were purchased. Those were Bertolli, Pompeian, Carapelli and Mezzetta (a Pugliese brand unfamiliar to me). For the others, the results are mixed: Whole Foods’ own store brand, for instance, “365 100% Italian,” failed in samples from Sacramento and San Francisco, but the Los Angeles sample passed easily. Similarly, Colavita’s samples from San Francisco and Los Angeles failed to meet the mark but the Sacramento sample sailed through. A similar story could be told about all of the imported oils, all of which passed some tests, but not others.

What does this mean? Presumably Colavita sent the same oil out from its producer to the three retailers in the study, but somewhere during shipment it ran into a bottleneck or, more likely, a handler who was indifferent to the delicate nature of olive oil. Everyone who writes about olive oil for consumers stresses the need to keep it in a relatively cool (65ºF.) dark place. Never, we say, purchase olive oil in a clear glass bottle; and never purchase olive oil from a shop where it is exposed to light — not just sunlight but even shop lights can do a terrific amount of harm. The Davis test confirms that we are all too often preaching to deaf ears. What is not always clear to the oil-buying public is that even the finest extra-virgin oils can and do deteriorate with poor handling or just with the passage of time, losing intensity of color and flavor, even turning rancid, so that they no longer qualify as extra-virgin.

Because Colavita’s Sacramento sample passed the test, an inescapable conclusion is that the company’s oil was poorly handled in the other two places from which samples failed, most likely because bottles were stored too long and perhaps in a place where the contents were exposed to too much light and heat. Fault Colavita for not keeping closer control over distribution, but it’s not an easy task from half a world away. I wish the Davis report had revealed the names of the shops where the faulty samples were purchased since in many cases, it’s clearly the fault of the shopkeeper if an oil is improperly handled.

Smart consumers will always look for a harvest date or at least a use-by date on the bottle (not all bottles will carry that, and especially not the more industrial oils). It is not clear from the Davis study whether all the samples purchased were from the same harvest year, which would be a critical determinant of quality. If for instance the two Colavita oils that failed were already three years old, then it is understandable that they would fail to meet the extra-virgin standards since, according to IOC requirements, the shelf life for extra-virgin is just two years.

The valid conclusion to draw from the Davis report is not that all imported olive oils are fraudulent, but rather that most of the imported oils tested were deficient. What it does not mean is that your fine Tuscan estate-bottled 2009-harvest extra-virgin, so expensive you feel you should dab it behind your ears instead of on your salad, is a fake. In extra-virgins, as in so many other aspects of food, you pays your money and you takes your chances. Just because it says extra-virgin doesn’t mean it’s any good. 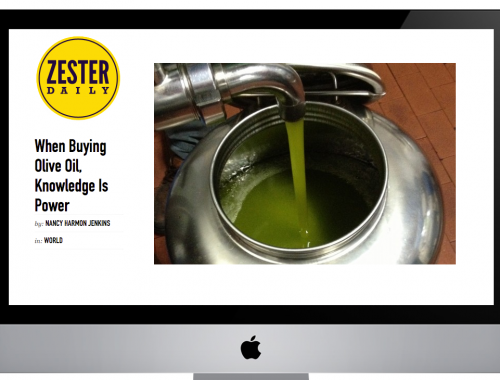 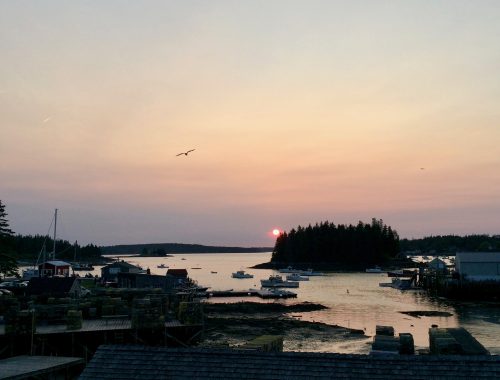 Take That, You Locavores!