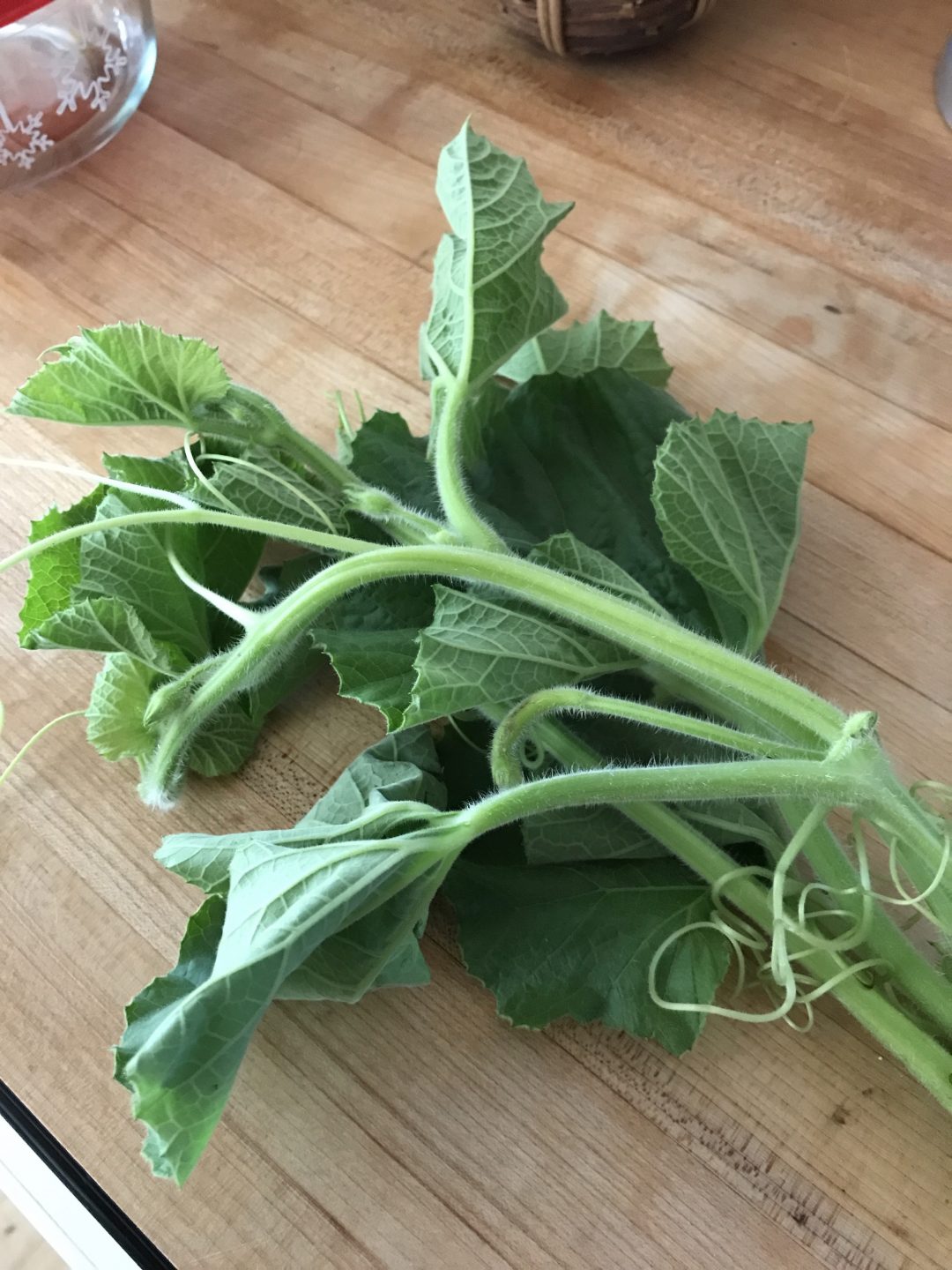 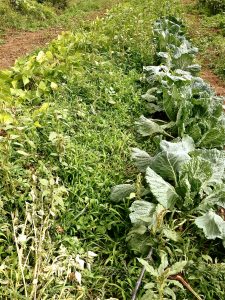 L’orto del professore, the professor’s garden, is riotous, an unruly tumult of beans and squashes, tomatoes and peppers, cabbages, kale, lettuce, cucumbers, and wild things too. When I visited il professore a few years ago at his home near Piazza Armerina in central Sicily, there were green beans twining up poles and low bush beans (borlotti, the kind that, when dried, get turned into zuppa di fagioli); there were climbing squashes and long, pale, snake-like squashes–Sicilian favorites called cucuzza–and big round pumpkins in various shapes and shades of yellow-stained orange; there were eggplants and tomatoes and cabbages, there were peppers in all sizes and degrees of heat. Everything grew together in helter-skelter fashion and there was also growing everywhere a surfeit of what you (and I) might call weeds—but they all had names and they all had purposes, from familiar purslane, growing close to the ground, so healthy and delicious in salads, to tall plants of amaranth with their graceful pink flower stalks laden with seeds, and lamb’s quarters (Chenopodium album), nettles, and mallow (Malva sylvestris), all of them valuable sources of food for anyone who knows what he’s about.

And the professor knows what he’s about. He is a noted gardener, forager, and expert on all manner of living creatures, but especially those that grow in the ground. My friend the chef Salvatore Denaro, himself no mean forager of wild greens, always spends time with the professore when he’s visiting his native Sicily. It was Salvatore who took me to meet him after a morning during which the two genial gentlemen had rambled through the pine forest above Piazza Armerina, on an unsuccessful search for mushrooms (it had been a very dry summer). Salvatore had supplied the professore with seeds of cavolo nero, a type of kale that’s a foundation of wintertime tables in Tuscany and Umbria, and now he wanted to see how the plants did in the unfamiliar environment of central Sicily.

In brief, they had done spectacularly well in a hot, dry climate, 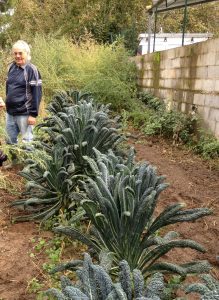 growing thick, dark, blistery, blue-green leaves that, when stripped of their tough central stems, would be steamed, fried, or added to soups. It’s sometimes hard to explain the kind of niche levels of consumption that exist in Italy. It’s less than 400 miles from Salvatore’s garden in Umbria to the professore’s in Sicily, and yet cavolo nero is as exotic in Sicily as some Chinese herb might be in New England. And just as no one in Umbria would think of using the fragrant dried oregano that is ubiquitous in Sicilian cooking, so no one in Sicily, as far as I could tell, had tried to grow cavolo nero. (In U.S. markets, where it’s been appearing for several years now, cavolo nerois sometimes known as Tuscan kale or lacinato kale.)

I admired the professore’s success with cavolo nero but I was more interested in the garden as a whole and its riotous profusion. I can’t think when I’ve seen a garden that looked more undisciplined, even abandoned. Used to the trim and tightly weeded rows of a New England vegetable garden, I was undone by what looked like an uncontrollable wilderness. And yet the plants were healthy, with no trace of bugs or diseases. As we stalked through bean patches and clambered over pumpkin vines, it suddenly struck me. “This is a very Catholic garden,” I said. What did I mean? “Well, it’s wide open to anything and everything, saints and sinners alike.” The professorelaughed. “I’m not a Catholic,” he said. “I’m somewhere between an atheist and an agnostic.” “So was my father,” I replied, “but he had a thoroughly Protestant garden, straight rows, tidy, neat, disciplined.”

Can that be? Is there really such a thing as a Catholic garden or a Protestant garden? It’s fun to think about and maybe there’s a bit of truth in it. We continued our banter as we made our way back to the house where a lovely lunch awaited us—pasta with tenerumi, fresh from the garden; a sweet-and-sour braise of rabbit; with caponata, that great Sicilian combination of eggplant, tomatoes, zucchini, peppers, onions, garlic, and olive oil (talk about Catholic!) on the side; and a desert of simple slices of chilled melon. All prepared by the professore’s wife, whose 94-year-old mother, a testament to the virtues of this Mediterranean, fresh-from-the-garden diet, joined us at the table.

Now, you may be asking, what exactly are these tenerumi? Tenerumi are the tender (tenere—get it?) green leaves and budding tips from that same cucuzza squash, 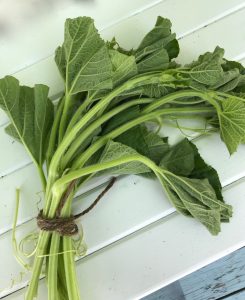 the long, snake-like squash I mentioned earlier that is such a favorite in Sicily, and, like the oregano I also mentioned above, quite unknown in more northern parts of Italy. The squash itself is a summertime favorite, harvested when young, then chunked and stewed gently with other vegetables. It’s considered “cooling” according to the Doctrine of Signatures, which goes all the way back to Hippocrates if not earlier. But the leaves and tender shoots of the plant are also edible, and indeed prized in Sicily, and they were growing all over the professore’s orto, putting out delicate white flowers. (The white flowers mean that technically this is a gourd not a squash, which has yellow flowers.) I’ve seen tenerumi leaves sold in New York City Greenmarkets and I imagine they’re probably seasonally available in other parts of the country as well. They are deliciously refreshing, slightly astringent, and when cooked with pasta, make an exciting and unusual first course. The professore’s wife prepared her tenerumi by slicing the leaves and part of the stems, discarding any tough or wooden stem-ends along with the tendrils, which won’t soften with cooking. You should have about four cups of fresh sliced tenerumi for the recipe. 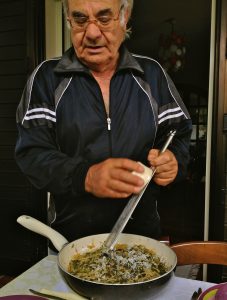 Could you make pasta con tenerumi with other types of squash leaves too? I don’t see why not, as long as they are not big, old, tough, and covered with prickles. The leaves and shoots of young zucchini and other types of summer squash would be just fine, but I wouldn’t use old hairy leaves of pumpkins or hard winter squash. You can also order seeds for cucuzza from Growitalian.com (search for zuchetta) and plant them in your garden next spring, just like zucchini. Harvest the squash (sorry, gourds) when they’re not more than a foot long, and pull off the leaves and tender shoots whenever you feel the urge—you can go on with this all summer.

This makes enough for 4 servings—and note that it’s more soup than pasta and should be eaten with forks and soup spoons.

Add the garlic and oil to the bottom of a 3- to 4-quart stock pot and set over medium heat. Cook, briefly, stirring, until the garlic has softened, but do not let it brown. Stir in the halved or quartered tomatoes and the chili pepper and continue cooking, stirring, until the tomatoes are starting to give off juice and the bits of chopped chili have softened. Add the cleaned tenerumi leaves along with a generous amount of salt and black pepper. Stir very well to mix all the ingredients together, then add about 6 cups of water and bring it to a simmer.

Let the liquid simmer for about 15 minutes, or until the leaves are tender but not falling apart. While the leaves are cooking, break the spaghetti into approximately one inch lengths. When the leaves are sufficiently cooked, stir the pasta into the pot along with another pinch of salt. Let it cook till the pasta is done—approximately 8 minutes, or according to your own preference. Serve immediately, in soup bowls or plates. Add a generous dollop of extra-virgin olive oil to the top of each serving along with a handful of freshly grated cheese.

This is often served in summertime at room temperature but in the chilly days of autumn I prefer it as the professore’s wife served it—hot from the pan.

Note that some people like to add a potato or two, peeled and cubed, right at the beginning along with the tomatoes. 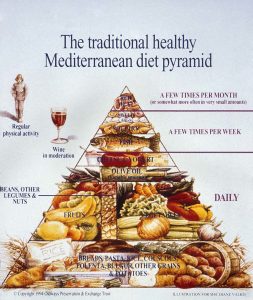 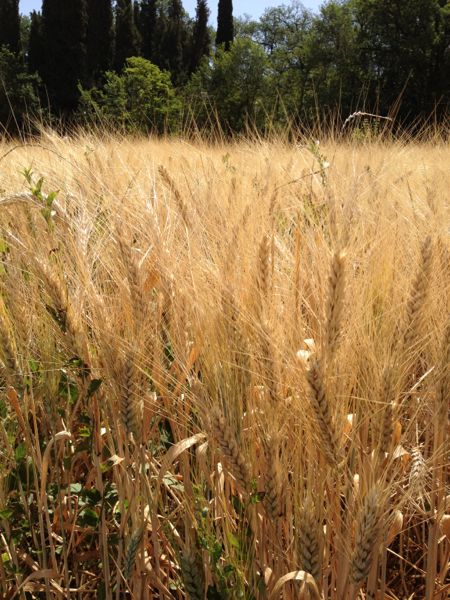