Salvatore Denaro, a great Sicilian-Umbrian chef, joined our Tuscan cooking classes at Villa Campestri (Speaking Tuscan in the Kitchen/AmorOlio May 2012), and gave us a whole new repertoire of very beany spring dishes. Do, please, let me know if you have any changes to suggest.

I got these from the man himself, talking with him on the phone today. I haven’t tested them actually, though they sound pretty okay to me. Let me know if you have any problems.

Salva says this is called Virtu because it turns poor, humble, leftover beans in the back of the cupboard into something virtuous. Others say it’s an ancient recipe based on propitiatory rites, cleaning out all the old stuff and getting rid of it before the new stuff comes into the house—a bit like cleaning out all the old flour at Passover which has a similar function even if it has been transformed into something else.

Note that the farro should be “pearled” or “hulled” or, if in Italian “decorticato.” If you can only get farro with the outside hull on each grain, you should soak it overnight to soften.

You should have ready a cup of beans (white beans are best) that have been soaked overnight, then drained and cooked in fresh water until soft, then drained again; also a cup of chickpeas, equally soaked, drained, cooked but NOT drained again because their liquid will go into the final mix. Salvatore says small beans and chickpeas are better for this than big ones.

You start to cook the minestra with a finely chopped mix of 2 celery sticks, including the green tops, 2 carrots, and 2 onions; you can add a little diced guanciale or pancetta or even prosciutto to this if you wish. Saute gently in olive oil until the aromas rise from the pan, then add a cup of farro (all these measurements of the beans and the farro can be adjusted any way you want—you could even make this with all beans if you don’t have any chickpeas, for instance). Stir it around in the vegetables and the hot fat, just as you would with a risotto, for 5 minutes or so, then start adding very hot water (keep a tea kettle full of water simmering on the back of the stove), small amounts at a time and stirring it in, as you would with a risotto. The farro will take about 40 minutes to cook and Salvatore says you could add a half-cup or so of lentils half way through this time if you wish (he didn’t do that at Campestri).

When the farro is half-cooked, add a cup or more of fresh shucked fava beans and stir them in. When the farro (and the lentils if you’re using them) is fully cooked, stir in the cooked beans (remember without their broth) and the cooked chickpeas with their broth. Add a cup or more of shucked or shelled peas and continue cooking until the peas are tender. Everything should be very soft and flavorful by the time it’s all done.

He says you should add salt and pepper, of course, if necessary, and also a little peperoncino—that’s the small hot chili that, Salvatore says, Paolo likes. It goes without saying that this, and any other, legume dish will benefit from a healthy dollop of extra-virgin olive oil, preferably a Tuscan or Umbrian oil. 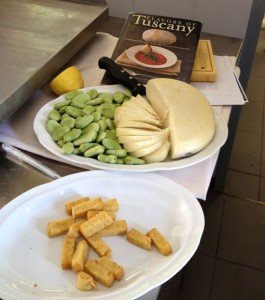 Slowly whisk the chickpea flour into the water, a little at a time so that lumps don’t form. Add a good big pinch of salt, several grinds of white pepper, and a finely chopped bunch of parsley, leaves only. Set aside to rest for at least 1 hour. (I don’t know why but every recipe I’ve ever seen for chickpea flour says it must rest for an hour after mixing.)

When you’re ready to make the polenta, you’ll need a pan with sloping sides like a wok. Set it over medium low heat and add the mixture. Give it a stir and let it start to cook. Keep stirring, more frequently as the polenta cooks down and starts to get firm. (Be careful—spitting hot polenta can burn naked arms!) When it is very firm, pour the polenta out on a board or marble surface and spread it, using a spatula dipped in water, so that it’s about an inch thick. Leave it to cool.

Now heat your oil in a frying pan (again, a slope-sided wok is a great choice for this). While the oil is heating, cut the firm polenta in slices like cigars, that is, about 3 or 4 inches long and not more than half an inch thick. When the oil has reached frying temperature (160ºC/360ºF), drop in the polenta slices, a few at a time, and toast until they are crisp and golden. Remove and drain. Sprinkle with lemon juice and salt and serve—Salvatore served them with fresh raw fava beans (the Leonforte beans) and cubes of fresh pecorino cheese. 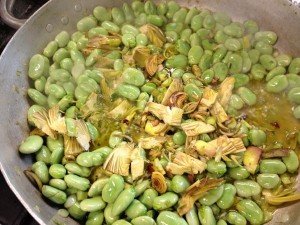 The artichoke and fava bean sauce for pasta

To make this you will need twice as much fave as artichokes—so, say, a pound of fava beans to a half-pound of artichokes (perhaps 3 or 4 artichokes, depending on their size).

Trim the artichokes in the usual way and then slice them and drop the slices in acidulated water (water to which the juice of a lemon or some white wine vinegar has been added). Shell the fava beans.

In a big saucepan, combine finely minced pancetta and garlic with oil and cook two or three minutes, until the pancetta is melting and the garlic has softened. Stir in some peperoncino, either breaking up a chili or adding a little spoonful of chili flakes.

Add the artichoke slices to the pan and cook for a few minutes, then add the fava beans. Add a little boiling water and cook down over medium-low heat. Keep adding boiling water as the beans absorb it. The idea is to have a very creamy sauce, which will happen eventually.

This makes enough for about a pound (500 grams) of pasta. Personally, I think short stubby pasta is much better for this dish than long, skinny pasta. Bring a large pot of water to a rolling boil and add a good big pinch of salt. When it returns to the boil, add the pasta and cook until almost, but not quite, done. Now spoon the pasta out and add it directly to the saucepan with the artichokes and fave, and at the same time add a ladleful of pasta water (this starchy liquid also helps to make the sauce creamy). Cook the pasta in its sauce until it is completely done, then serve immediately with a good dribble of Sicilian olive oil atop each dish.