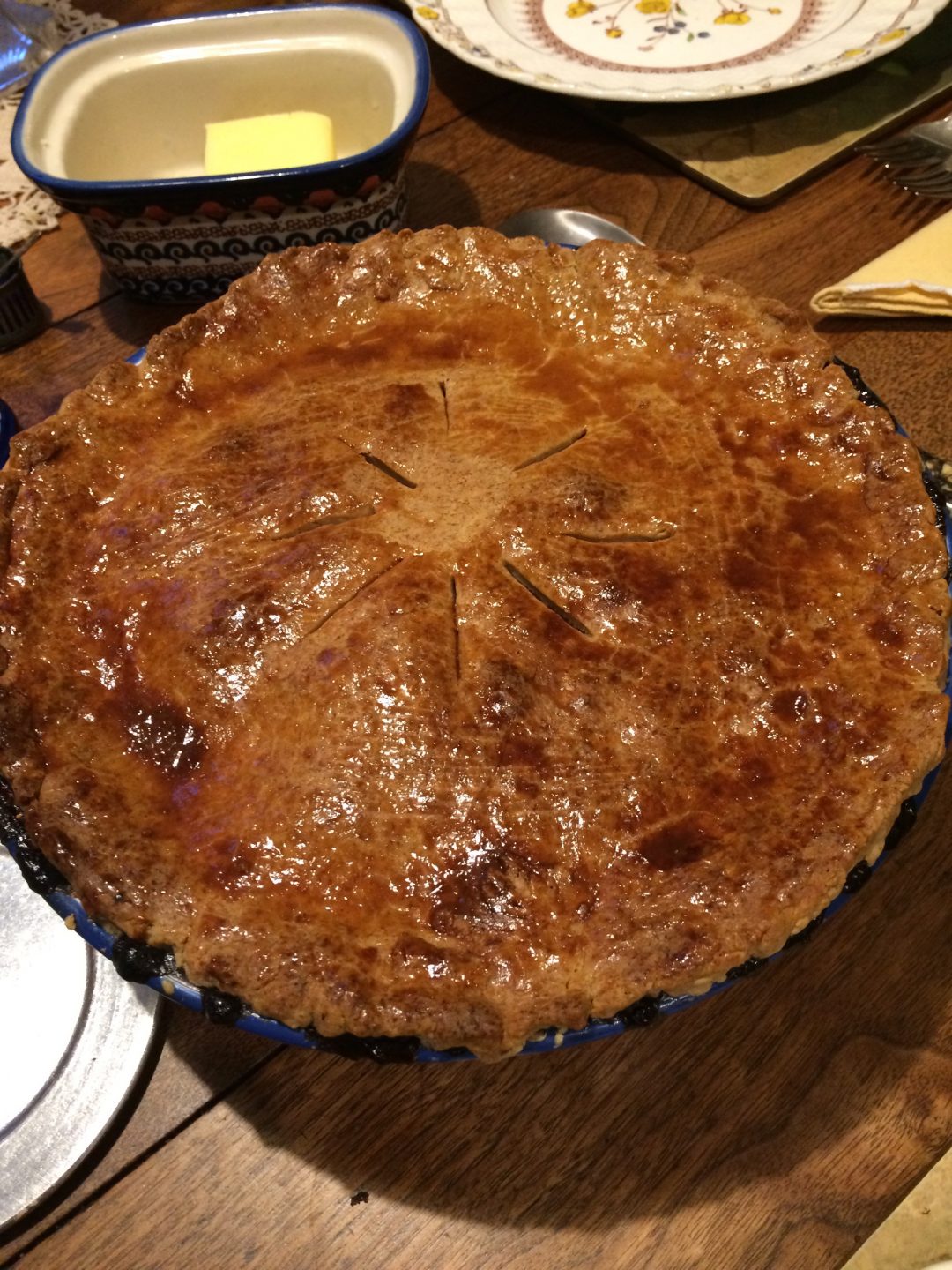 A Joycean Beef and Guinness Pie

The menu was obvious. It had to be Irish.

The book group, which meets sporadically and has no program beyond reading what we agree is interesting, had decided to take up A Portrait of the Artist and it was my turn to provide. At first I thought of grilled kidneys, in tribute to Leopold Bloom, but decided they’re just too darned rare and too exotic, even for the book group. So I settled on Irish stew, but a particular kind of Irish stew made with beef and Guinness and baked in a pie, which made it seem even more Irish. I found Sam Sifton’s recipe for exactly that, beef and Guiness pie, and stole his pie crust but otherwise more or less avoided his recipe in favor of another I found on line that, to the rich and bitter flavors of Guiness added soy sauce, Worcestershire, and Vietnamese fish sauce (it would have been anchovy Beef and Guinness baked in a pie

sauce originally, I think), plus a shot of very dark strong coffee and a hit of, not too surprisingly, chocolate. Put the whole thing together and it was a pretty astonishing amalgam of flavors, complex, dark, mysterious, and, as the Brits say (and maybe the Irish too), decidedly more-ish.

Here’s the recipe for the stew, which can be eaten as is, with steamed potatoes, or turned into a pie (a piecrust recipe follows). Don’t be dismayed by the list of ingredients. All are readily accessible and once you have them, the stew is incredibly easy to put together. It takes time to cook but you can spend that time re-reading chapter five of A Portrait of the Artist as a Young Man.

First whisk together the chicken stock and gelatin. (It seems like a lot of gelatin but it will all work out in the end.) Set aside.

Cut the beef brisket into bite-sized pieces, about 1 to 2 inches to a side, and sprinkle the meat liberally with salt and pepper. Add 2 tablespoons of the oil to a large, heavy, lidded saucepan, one that can go into the oven later; a Dutch oven is perfect for this. Set the saucepan over medium-high heat, and when the oil is very hot, add the meat. Sear thoroughly, browning on all sides, then remove to a platter or bowl and set aside.

Lower the heat and add the halved carrots, parsnips, and onions to the pan, along with the garlic cloves. Cook, turning from time to time, until the vegetables start to brown but do not let them burn. Scrape the gelatin stock into the pan and add the bay leaves, coffee, chocolate, fish sauce, soy sauce, and Worcestershire. Add the Guinness. Let the liquids come to a simmer and stir to mix in the melting chocolate.

Add a tablespoon of flour to the meat, tossing the pieces to coat them well. Add a second spoonful of flour if necessary to thoroughly coat the meat. Then scrape the meat, along with any juices remaining, into the saucepan. Partially cover the pan and transfer to the oven. Let cook for half an hour, then pull the stew out and give it a stir. Return to the oven, again partially covered, and let cook another 30 minutes. Repeat a second time for a total cooking time of 1½ hours.

You may do the whole stew ahead of time up to this point. Remove the stew from the oven and let cool a bit. Then, using tongs or a slotted spoon, remove and discard all the over-cooked vegetables. Remove the meat to a separate platter or bowl and set aside, refrigerated if necessary, until ready to continue with the recipe. Transfer the cooking juices to another bowl, cover with plastic wrap, and refrigerate long enough to let the fat rise and congeal on the top. Remove and discard the congealed fat.

In a small bowl, cover the dried mushrooms with very hot water and set aside to soften thoroughly, about half an hour. When they are soft, strain the liquid through a fine sieve into a bowl. Rinse the reconstituted mushrooms to rid them of any traces of sand. If they are large pieces, chop coarsely.

When you’re ready to continue, recombine the meat and defatted liquids in the saucepan and set over low heat to warm. Add 2 tablespoons of the oil to a separate skillet and set over medium heat. Add the diced carrots, parsnips and onion to the pan. Stir and toast in the hot oil until they start to brown around the edges but do not let them burn. Scrape the vegetables into the stew.
To the same skillet, add any remaining oil and return to medium heat. Add the fresh mushrooms to the skillet and cook until the mushrooms have given off a lot of liquid and then re-absorbed it. At that point, stir in the reconstituted mushrooms with their soaking liquid. Bring to a simmer, then add the mushrooms with their liquid to the stew.

Raise the oven heat to 375º and return the saucepan, partially covered, to the oven. Bake for 30 minutes, then remove the lid and bake an additional 30 minutes, at which point the stew liquid should have reduced to a thick, dark sauce that fully envelops the meat and vegetables. Remove from the heat and set aside to cool slightly.

If you wish to turn this into a pie—and it makes a great presentation—transfer the stew to a 9- or 10-inch in diameter deep ceramic pie dish. One with straight sides, such as a deep quiche dish, will work best. Sprinkle with chopped parsley.

Use your favorite pie crust recipe (see the one below, which is adapted from one in the New York Times) or, no apologies, use a good-quality frozen pie crust. Roll it slightly larger than the top of the pie dish, crimp the edges and cut a few slashes in a star pattern. Brush the top of the pie all over with the egg wash and transfer to the hot oven, setting the pie dish on a flat sheet pan to capture any escaping juices. Bake about 45 minutes or until the top is golden-brown. Let the pie rest for 10 minutes or so before cutting into it. (It is also good served at room temperature or slightly warmer.)

Buttery crust for a one-crust pie:

Combine the flours, baking powder and salt in the bowl of a food processor and process briefly just to mix. Add in the chunks of butter and process in brief spurts. The mix will look quite mealy. Slowly, through the feed tube, add ice water, a teaspoon at a time, until the dough comes together. (You probably will not need to use all the water.) Transfer the dough to a wooden board and knead very briefly, just to c

Beef and Guinness baked in a pie

ombine it all, then pat out a small disk, wrap it in plastic wrap and referigerate for at least 30 minutes. When you’re ready to roll it out, set the dough disk on a sheet of wax paper on the board, then top it with another sheet. Roll out in a circle large enough to cover the top of the pie with a little hanging over the edge. (See directions above.)

Stop Me If I’ve Told You This Already