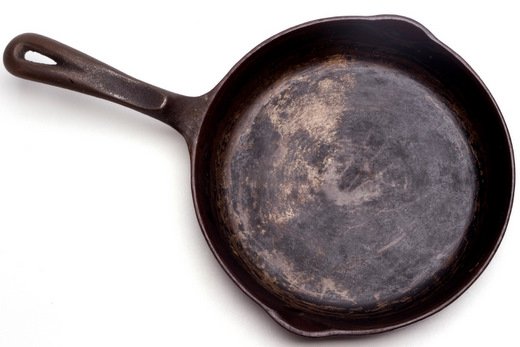 In Praise of Spiders

There was a black iron skillet in my mother’s kitchen that she always called the spider. “Fetch me down that black iron spider,” she would say when she was getting ready to start on one of her famous dishes –tuna fish casserole, for instance, topped not with potato chips but with baking powder biscuits;

or American chop suey, which surely must have had an Italian ancestry, made as it was with ground meat, tomato sauce and elbow macaroni. Or cornbread — no cornbread could ever fulfill its flavor potential, she declared, unless it was baked in that black iron spider.

Clearly the black iron skillet was one of the most useful implements in her kitchen. But why did she call it a spider?

The term is said to be purely American, and some say it’s purely Southern, which is patently ridiculous because my mother never went south of Delaware until later in life when she was rich enough to winter in Florida. You might guess that it’s a British term, but that doesn’t bear out either. One of the earliest references to a spider is in Lydia Maria Child’s “Frugal Housewife,” published in 1829. Child refers to a “spider or skillet” and a “griddle or spider” for making a type of scone that was flavored with cinnamon or cloves, and rosewater or lemon brandy. And Child was a rigorous old Yankee, abolitionist, early feminist and fighter for Indian rights. (She was also a poet, most notably of the Thanksgiving classic “Over the River and Through the Woods.”)

In my view, and I’ve given a lot of thought to this, the term spider is one of those words that lingers long after it has lost all sense or meaning. I think the original spider was a pan with a rounded bottom that sat on three legs so the cook could perch it comfortably on the hearth above the bed of coals or embers. It didn’t really look like an eight-legged spider but may have reminded colonial cooks of a peculiarly truncated arachnid. And the name stuck. Later, as flat-topped stoves became common and hearth cooking went the way of tinder boxes and sulphur matches, the earlier vessels were no longer useful and so evolved into flat-bottomed skillets or frying pans or . . . spiders.

In any case, a black iron spider or skillet, whatever you want to call it, is indeed useful, and a whole series of them, such as I have in my kitchen, even more so. My daughter the chef pointed out that restaurant chefs like to sear at very high heat, then move the pan over to a lower temperature to finish off a dish, often adding liquid in the form of wine or broth or even just water. This is difficult with an ordinary domestic cookstove unless you have an iron skillet. Because of the indestructible nature of iron, you can really get these pans hot, even in a home kitchen. (You can also put it in a 500-degree oven and leave it for 15 or 20 minutes to get it really hot.)

It’s a great technique with meat or fish, giving a nicely browned, often crisp exterior. In my family, we also make what we call “burnt vegetables” — strips or slices of vegetables such as zucchini, eggplant, carrots, onions — vegetables that don’t have a lot of juice to ooze out. Slice them and dip the slices in a bit of extra virgin olive oil, then sear and brown them on a preheated black iron surface (the best is the kind of ridged iron griddle meant for grilling steaks), turn once and dribble with lemon juice before serving.

The pan doesn’t have to be searingly hot to be useful. In my small skillet, I fry or scramble an egg or two for breakfast over gentle heat and, because the skillet is so well seasoned, it’s just like using a nonstick pan. If anything does stick, a long soak in the sink (no soap, ever) will usually dislodge stubborn bits.

A deep skillet, such as my 12-incher, is great for deep frying. Southern cooks traditionally use this for Southern batter-fried chicken, but it’s just as good for battered fish or whole young spring-run smelts, lightly rolled in cornmeal before frying. And speaking of cornmeal, spider cake or skillet bread or Johnny cake, a quick bread made in the black iron skillet with yellow or white cornmeal, is an American classic.

The best thing of all about black iron cookware is that it’s so darned cheap. I’m not talking about enameled cast iron like the French Creuset line, which — although gorgeous — can set you back so far you may never get up again, but rather plain, home-grown Lodge cast iron, or antique cast iron cookware that you can find in yard sales and antiques shops all over the Northeast, and possibly in other parts of the country as well. A 10-inch new Lodge skillet will cost in the neighborhood of $22.95, while a yard-sale purchase is anyone’s guess. Genuine antique skillets can also be expensive — griswoldcookware.com specializes in this famous Pennsylvania company which lasted nearly a century, only to close down in 1957. They made everything from skillets in many sizes to roasting pans to Dutch ovens to coffee roasters. A particularly fine Griswold Dutch oven with a lid is advertised on the site for $1,250. Why so expensive? Because Griswold iron ware is a very popular collectible, which inevitably drives up the price.

Often, when you’re buying used cookware, it doesn’t look at all promising, but it’s usually fairly easy to restore even the most grotty looking iron pans. Here’s one we found in the galley of a boat we bought a few years ago: 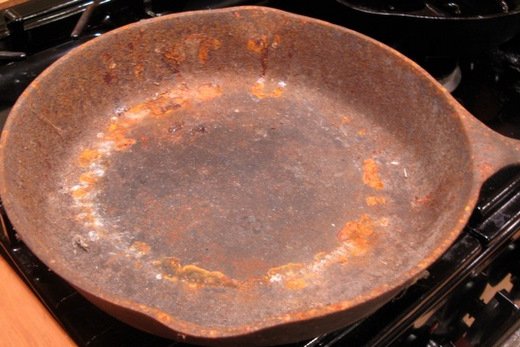 And here’s what it looked like after I’d worked on it a couple of days: 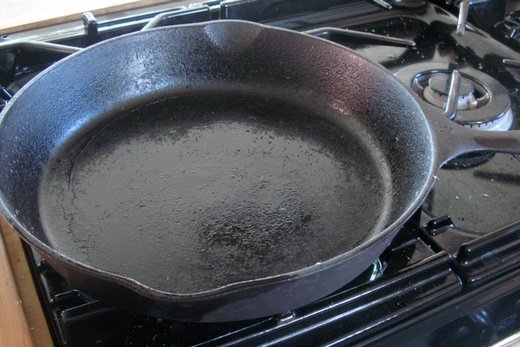 And here’s what I did: First I went over the pan, inside and out, with a soapy scrubbing pad (Brillo, I mean), then rinsed it all carefully and set it aside to dry. (Note that that was the last time the spider would ever see soap.) It still didn’t look like much, but at least most of the rust had come off. I then tossed in a small handful of coarse salt and about a quarter cup of some old olive oil that had lost its punch and continued scrubbing with the salt and oil combination until the skillet was starting to look the way what I wanted. Again I rinsed it out — no soap this time — and dried it on a medium-hot burner. Finally, I heated the oven to 400 F, covered the bottom of the spider with a good film of olive oil, about ?-inch thick, set it in the preheated oven and simply left it for about 40 minutes — or until I could no longer stand the odor of hot metal coming from the oven — then turned the oven off and let the pan cool down. I wiped out the excess oil with paper towels and it was ready to go. I won’t try to cook eggs in this spider until I’ve had a chance to season it further, which will happen as I continue to use it, but I’ve already done a vegetable mixture, searing the vegetables over high heat, then tossing them with lemon juice, and it was delicious. As good as anything that comes out of my Creuset skillets and at least $180 cheaper.

The following is a recipe from food writer John Thorne that I published in The New York Times more than 20 years ago. It has only become better with age. Just be sure to use a good corny cornmeal, as fresh as possible:

Directions
Set the oven on 450 F. Toss together the cornmeal, flour, baking soda and salt in a bowl. (You’ll want more or less salt depending on the saltiness of the pork you use.) In a smaller bowl, whisk the buttermilk and egg until well blended.

In an 11- or 12-inch black iron skillet or spider set over medium heat, render the pork dice until they become cracklings, crispy and etched with brown, and yield up their fat. (If the pork you use is very lean, add some oil to the pan to help in the browning.) Remove from the heat and add all the bits and most of the fat to the cornmeal mixture, reserving a little fat in the skillet. Set the skillet in the preheated oven to get very hot.

Stir the pork bits and their fat into the cornmeal mixture, then add the liquid, mixing only enough so there are no big dry lumps in the batter, which should be pourable but not runny. Add more buttermilk or more cornmeal if necessary, depending on whether it is too thick or too thin — it should be the consistency of heavy cream. Set aside.

When the fat in the skillet begins to smoke, remove it from the oven, using heavy-duty oven mitts (caution: the pan will be very hot). Tip the batter into it, letting it spread across the bottom of the pan. (It will not quite cover the surface.) The batter should sizzle when it hits the hot iron.
Immediately set the skillet back in the oven and bake 8 minutes if you want a moist center, 2 to 4 minutes longer if you prefer it dryer. The cake is done when it’s golden on top and the center is firm when the pan is gently shaken. Invert the whole cake onto a plate or cutting board and serve with the brown crust on top.

Eat with butter if you wish, but it is delicious as is. At breakfast it’s even better with a smear of fruity jam or marmalade. 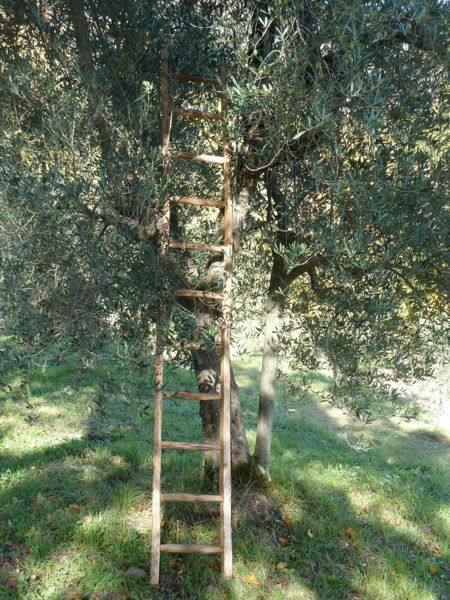 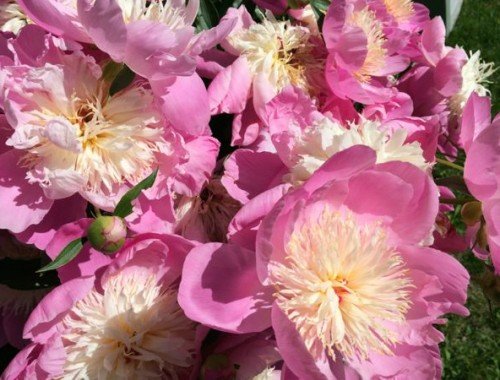