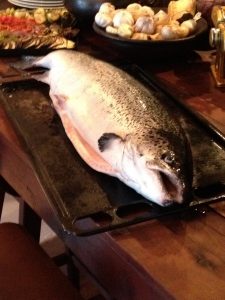 To continue my saga of cooking fish, how easy it is to produce, and how good it is to have on our tables, I offer an exceptionally simple oven-roasted salmon fillet, quick and stress-free to produce, and infinitely variable depending on how you sauce it (or not).

Basically, it’s just a boned fillet of Atlantic salmon, set skin side down in an oiled oven dish and roasted for 15 or 20 minutes in a very hot (425º) oven. The real beauty of it is that you can add any number of flavors just by varying the sauce that accompanies the fish.

I think of half a dozen different sauces and garnishes that will work—maybe, to start with the simplest, just a dressing of olive oil, lemon juice, salt and pepper, part of it spooned over the fish as it goes into the oven and the remainder added immediately to top the hot fish as it comes out. Use a really aromatic olive oil (Sicilian Olio Verde is my choice here but there are others) and inhale deeply as the heat of the fish releases all the oil’s rich fragrance.

Or you might begin with a standard fool-proof tomato sauce, 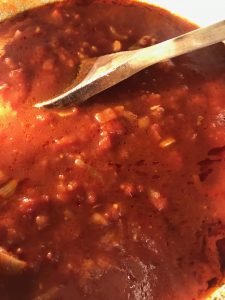 made with canned tomatoes (your own or a high-quality import like Gustarosso), brought to a simmer and perfumed with garlic and maybe a touch of chili or even sriracha. Smear part of the sauce on the bottom of the baking dish—a gratin dish is ideal and if the dish is handsome enough it can go straight from the oven to the table. Add the rest of the sauce on top of the fish and slide it into the oven, maybe with a few pitted black or green olives and some giant caper berries tucked into the sauce too.

Last night I made an adaptation of salsa khadra, literally “green sauce,” from a new book, Levant, https://tinyurl.com/y6trywc6 by Palestinian American chef Rawia Bishara, who has a wonderful restaurant, Tanoreen, in the Bay Ridge section of Brooklyn, out by the Verrazzano Narrows Bridge. Despite its rather obscure location, Tanoreen has become the place for anyone who loves, as I do, the multiple pleasures of Middle Eastern food, and well worth a trek out to the far ends of Brooklyn.

The recipe is at the end of this post. But first, a word about salmon: I use farmed Atlantic salmon, which, to my taste, is a richer fish with a finer texture than Pacific salmon. And I look for salmon labeled organic or salmon raised in the clean, cold waters of Cobscook Bay in Maine. When neither of these options is available, I look for Canadian salmon from the Atlantic coast—not the Pacific. (I’m not happy about introducing Atlantic salmon to Pacific waters, even though Atlantic salmon farms are quite widespread, from Chile north to Canada.) 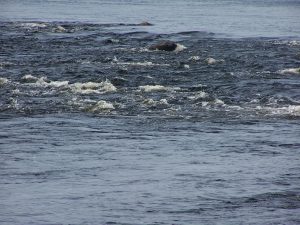 The major difference, however, is that Atlantic salmon are deeply endangered and the only examples available anywhere are from aquaculture.

That’s not a bad thing. Salmon aquaculture has come a very long way from the days when it was regarded with something approaching horror. Unfortunately, a lot of those old horror stories have become permanently embedded in the public conscious, including claims that farmed salmon are riddled with disease, laden with antiibotics, genetically modified, polluting, and maybe a half dozen other undesirables. Some of this was once true, much of it was not, and most of it is no longer applicable. Salmon farming has come a very long way and it may go even farther if proponents of RAS (Recirculating Aquaculure Systems) have anything to say about it. At the University of Maine’s Center for Cooperative Aquaculture Research in Franklin, Maine, where the focus is on RAS, one prominent researcher told me in no uncertain terms: “RAS is the only future for fish farming.” 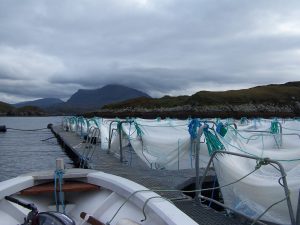 And fish farming is indeed the future. Already more than half the seafood consumed in the world is produced by aquaculture,whether shrimp from Southeast Asia (quite seriously questionable because of the methods used, the environmental degradation, and moreover the terrible conditions workers are reportedly subjected to) or oysters and mussels from Maine’s clean, cold, coastal waters. If we want to preserve the health of the oceans we should probably give up eating most wild-caught fish and stick to a healthful diet of sustainably farmed seafood.

In Maine we’ve watched as our wild salmon have disappeared, along with our cod, our shrimp (incredibly sweet, small Maine shrimp were a winter delicacy until just five or ten years ago), our wild mussels and clams, decimated by invasive green crabs. The scallop season has been cut drastically, even the elver harvest is tightly controlled, and we are left with our delicious native lobster, which now threatens to crawl off to Canada as the oceans warm.

Now for the recipe: 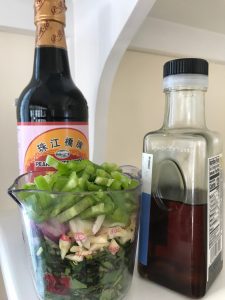 For salsa khadra, Chef Rawia Bishara combines cilantro, basil and dill with plenty of garlic, a small green chili pepper, some cumin and lemon juice and then, surprisingly, sesame oil and dark soy sauce, giving an unexpectedly Asian cast to traditional Levantine flavors. Here’s my adaptation of her recipe. It makes plenty for a 1½ pound salmon fillet, to serve four:

Combine the basil, cilantro, dill and garlic in a food processor and process, pulsing. Then add each of the following ingredients, pulsing after each addition. (Use the juice of just one lemon, then taste at the end and add more lemon juce if you wish.)

Take a salmon fillet weighing 1 ½ to 2 pounds and set it, skin side down, in an oven-proof dish that you’ve smeared with olive oil. Use half of the salsa khadra to spread over the top of the fillet and set it aside to marinate for an hour or so.

When you’re ready to cook, set the oven on 425º. Transfer the salmon in its dish to 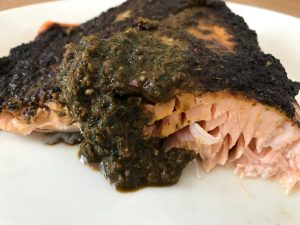 the hot oven and just let it roast for 15 or 20 minutes. You might like your salmon a bit on the undercooked side, or you might rather it be cooked all the way through—that’s up to you, but yu can tell the doneness of the fillet simply by poking gently into the thickest part with the point of a paring knife.
When it’s done to your taste, remove it from the oven and serve it with the remaining salsa khadra on the side. Like most salmon, it’s as delicious at room temperature as it is hot from the oven. 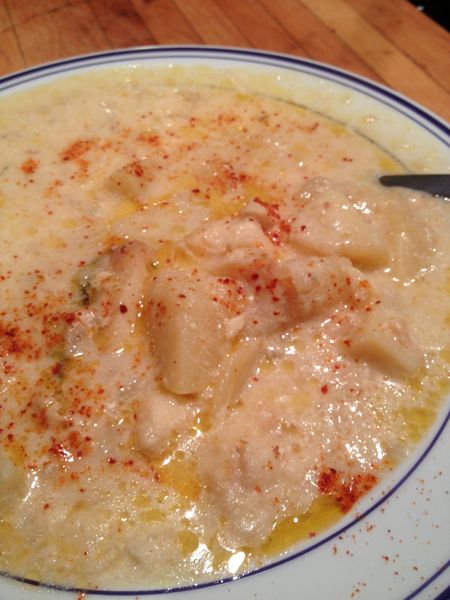 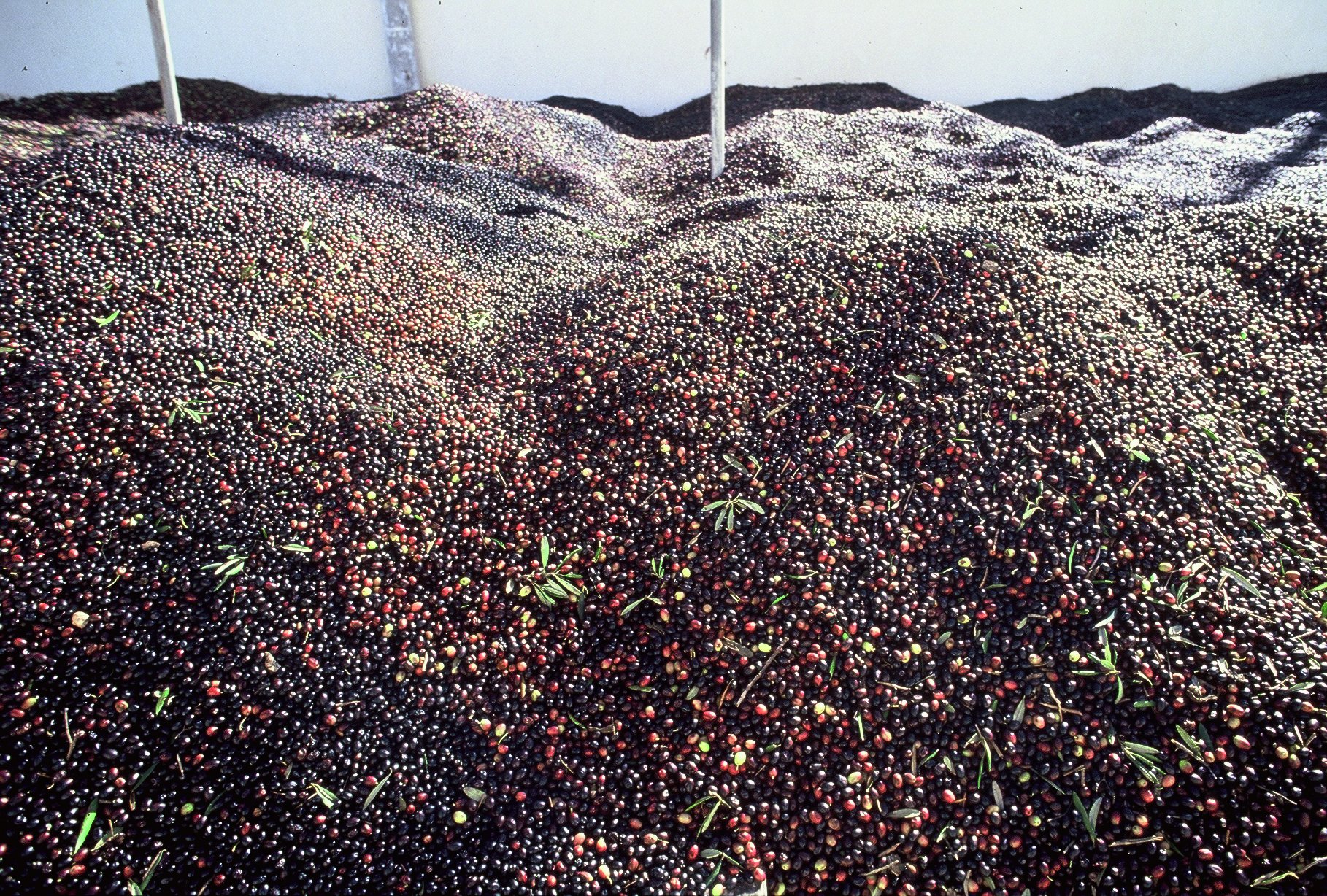 DUNNO MUCH ABOUT OLIVE OIL BUT I KNOW WHAT I LIKE!