It’s artichoke season in Tuscany. Markets are full of these wonderfully weird-looking vegetables which come in half a dozen different varieties, ranging from big fat round globe artichokes, very similar to what we have in America, to gorgeous, long and slender, purple tinted ones.

Most of the artichokes here lack the prickly centers that make American artichokes so difficult to handle in the kitchen or at the table. My challenge to the farmers of Castrovile, California, where most American artichokes originate: For National Mediterranean Diet Month, why don’t you find a way to get us Italian-style artichokes without the problematic spiny centers? You’d be doing us a huge favor.

Meanwhile, here’s a recipe for a smart and easy savory pie of artichokes and potatoes. In Calabria, where it comes from, it might be served as an antipasto but on American tables it could easily be a main course. This comes from my book about the cuisines of southern Italy, Cucina del Sole (Morrow, 2007).

To make this, you’ll need:

Preheat the oven to 375 degrees. Take a 1 1/2 to 2 quart souffle dish, or a similar round oven dish and rube about a tablespoon of oil around the insides, then sprinkle with about 3 tablespoons of breadcrumbs. 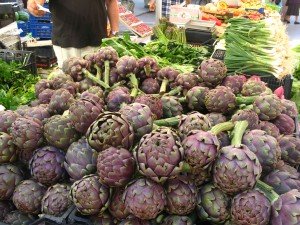 These plump beauties are called cimaroli, because they come from the top of the plant.

Use the lemons to prepare the artichokes in the usual way–cutting off the tough parts and rubbing the cut edges with lemon to keep them from blackening. Squeeze the juice of half a lemon into a bowl of cool water and toss in the prepared artichokes. If you’re using large ones, cut them in quarters and scrape out the spiny thorns in the center, then divide each quarter in half. If you have baby artichokes, just cut them in half–they usually haven’t yet developed spines.

Lightly cover with foil and transfer to the oven. Bake for 20 minutes, then remove the cover and bake another 20 minutes, or until all the vegetables are tender and the top is browned. Serve immediately. Or you can set it aside to cool to just above room temperature before serving. 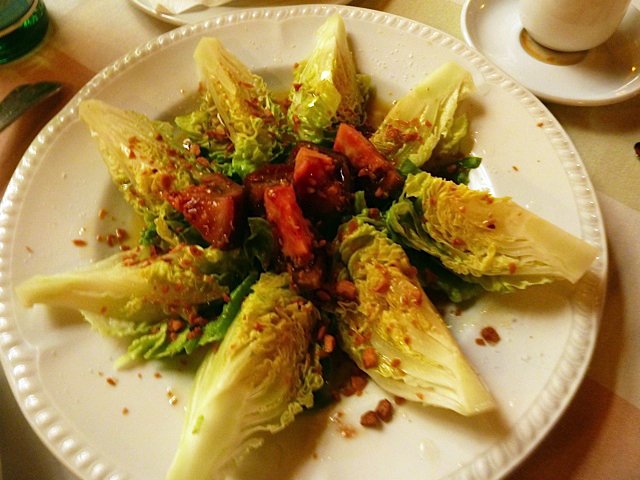