I will say it out loud and clear: I hate turkey. Call me un-American if you will, but turkey is boring, one of the most insipid meats that can grace a table. And Thanksgiving turkey is worse than most, overcooked, dry and stringy, and often raised under suspicious circumstances leading to grotesque deformities, i.e., breasts so over-developed that mature birds can’t walk about the turkey yard if they’re lucky enough to live in an actual yard.

The Anita Ekberg of poultry. I banned turkey for all time, including Thanksgiving, once I left my mother’s house and started doing Thanksgiving on my own.

Except for one Thanksgiving in Tuscany when, with a little help from my friends, I actually cooked the only turkey I ever enjoyed. That was the year I discovered a cache of four-year-old olive oil that had been tucked in a corner of the cantina and forgotten. It was perfectly good oil, not at all rancid, though it had lost much (rather, all) of its youthful flavor and aroma. Perfect, I thought, for frying a turkey and so it proved to be.

However, the turkeys available at the butcher in Cortona were huge, much too big to fit in even the largest stock pot, so we settled for what you might call a hind quarter of the smallest turkey in the shop and took it home. There’s a lot of information on the internet about frying turkeys but much of it seemed quite irrelevant to a stone-walled farmhouse. I was not afraid of setting anything on fire so we heated the oil on the kitchen stove. But first we put the turkey in the pot and covered it with oil to a depth of about an inch. Then we removed the turkey and set it aside while we heated the oil to frying temperature (around 360ºF—and a frying thermometer is absolutely necessary if you’re going to try this because you simply can’t judge that quantity of oil unless you’ve had a lot of experience). Once the oil was hot, we gingerly slid the turkey in, careful not to spill the oil. Then the question was how long to cook it? No recipe book could possibly contain the relevant information. “Cook until done,” I said, quoting many Italian cookbooks which are generally cavalier about precise times and measurements. And so we did. The turkey bubbled away comfortably in its boiling oil bath, growing ever more golden. After an hour or so, it had achieved a rather glamorous toasted color. We took it out of the pot and stuck a skewer into the thickest and meatiest part. Out came a spurt of the requisite pale yellow juices without a trace of red, meaning the turkey was done.

I regret that I never took a picture of that bird because it was mighty fine: The skin was crisp, crunchy, sort of like crackling, while the meat on the inside, because it had been completely protected by the hot oil, was juicy and tender. It was the finest turkey I ever ate. But since I haven’t actually eaten very many perhaps that’s not saying much. Still, I’d do it again, if I could find another cache of forgotten olive oil. Fat chance! 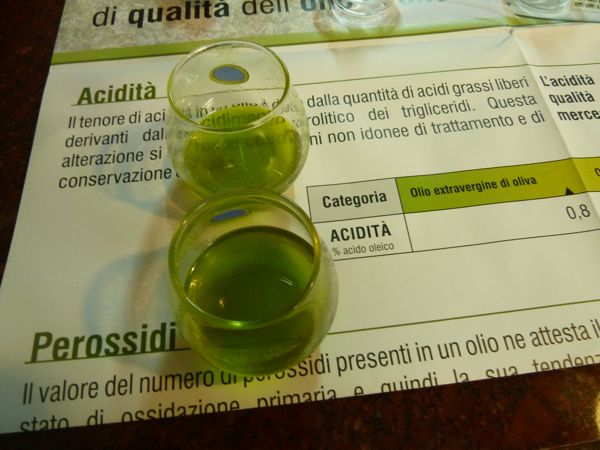